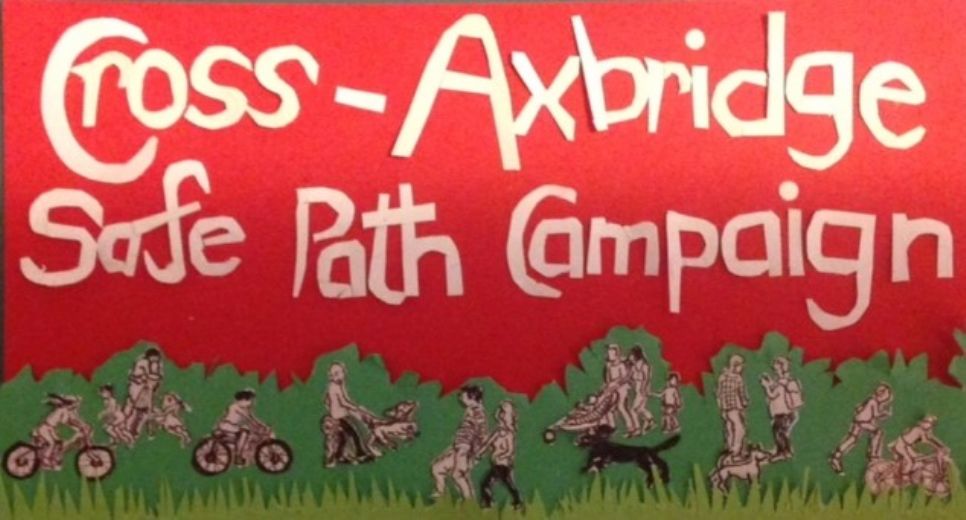 The old footpath was known locally as the Coffin Path because the deceased inmates of the Workhouse in Axbridge used to be carried along it to the church in Compton Bishop for burial, if they were of that parish. Other coffins would have used the path to get to the main road and thence to the parishes of Rooksbridge, Tarnock etc., as it was the practice that deceased inmates of the Workhouse should be returned to their own parish for burial.

In April 1962, when the plans for the Axbridge Bypass were being drawn up, it was recognised that there were concerns for the safety of cyclists. In May 1962 Compton Bishop Parish Council proposed a cycle track on Cross Lane which received a “sympathetic hearing” by Somerset County Council. However, no action was taken until the Cheddar Area Local Plan (1992) identified pedestrian safety as being in need of upgrading. SCC then budgeted for improvements to pedestrian facilities at Cross Lane and included these in the Local Transport Plan. Even then they were never carried out. So to date the many attempts by the Parish Council to protect pedestrians and cyclists have been to no avail.

In 2013 a group of local people, fed up with the lack of progress on creating the missing path/cycle route along Cross Lane, decided to form the “Coffin Lane Campaign.”  We are now working together with Axbridge Town Council on joint efforts to achieve our aims so are now renamed “Cross to Axbridge Path Campaign”, (safely connecting communities). Achievements to date:

2014 Organised a well-attended Procession from Compton Bishop to Axbridge via the A38/A371 crossroads; organised a Public Open Meeting in September 2014 attended by then-MP Tessa Munt, local Councillors and the general public.

2017/8 Our years of campaigning proved worthwhile with confirmation that a pedestrian refuge on the A38 and a safe footpath along the verge up to the stile was approved by Somerset County Council. With the support of Bob Filmer, County Councillor, we responded to consultations on detailed plans including lighting. The final plans were approved at a well attended Compton Bishop Parish Council Meeting on 24 October after a lively discussion when some concerns were raised as to the street lighting. The Parish Councillors undertook to further request that Somerset Highways do all that is feasible to minimise the impact of lighting on houses and the environment

Tess Gill, coordinator, says “It is our ain to achieve a safe link for all residents and visitors including cyclists between Cross, Axbridge and on to Cheddar and the Mendips, connecting with The Strawberry Line. Not just for local people but for all those who wish to enjoy our beautiful Somerset countryside on foot or by bike.”